This meeting was held on March 30 at the Oviedo college field and called to order at 10:05 AM by president Raed Elazzawi.  Approximately 12 members and guests were present.

Minutes of the February meeting were read and approved.

The Treasurer’s report was not available.

Members were reminded to call campus security when arriving and leaving at the college field.

New members Bob Sharp and Martin Wilson were voted in.

-ALES at the Ft Christmas field on 6 April.

The meeting was adjourned at about 1015 AM.

Hi guys, I just received an official flyer from Bill Staley about their Sailplane Fun fly Saturday May 14th at 9 am, bill would like the Buzzards to come out in force to intruduce sailplane flying to their club members, also to intruduce the Buzzards to their flying field. I will set up a winch and retreiver, Bill will have several scale gliders and a tug for hands on aerotowing, yes thats right you could experience the thrill of being towed up behind a power plane! Feel free to bring whatever type of sailplane, from GL to the red competetion sailplane, there will be food for $6. Gordon will post this info and the flyer on the web site? Thanks I will email it to you.
Raed

Found this online, $26.36, we have to order atleast 20 to waive the “digitize” fee for the logo. I am sure there is a charge for shipping also.
I went to a local store, their shirts are $25.10 with a digitize fee of $65 which is waived if we buy atleast 36 shirts. A hat like Jody was wearing today is $21.65, a regular baseball cap is $14.99 both with the logo.
Let me know what you guys think, how many would you buy. These are really nice cotten polo shirts (not cheapees) 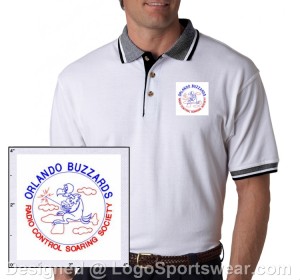 Thanks to Donald Fourson, the IRKS will reschedule their contest to a different date. So we are still on for May 1st.

Due to a scheduling conflict with the IRKS “sailplane contest #2”  I am considering moving the contest to Sat May 22nd. If anybody has an issue with the new date please let me know within a couple of days before I submit the change to the AMA sanction.

The Gainesville Gang is holding a warm up contest for their big event in Feb.