The Orlando Buzzards have been established in Central Florida as a Radio Control Soaring club since it’s inception by an avid group of flyers in 1974. That means the Buzzards have been around for just about as long as there has been such a thing as radio control soaring. With a strong following of various soaring enthusiasts the club has thrived for more than 3 decades. Due to the efforts of many hard working members and club officers, launching equipment, tents and storage facilities has been accumulated and a great flying field established in Oviedo – a fairly central location for all. Many well known pilots have flown at the Buzzards Field and contested with us during the years, including such notables as John Agnew, Brian Agnew, Frank Weston, Joe Wurts, Jim Thomas, Rich Burnoski (current US Team Member) and Gordy Stahl. Many others such as Don Cleveland, Lewis Gray, Rick Eckel and Ed White have served long term as club officers and contributed to the Buzzards stability and current solid financial base. 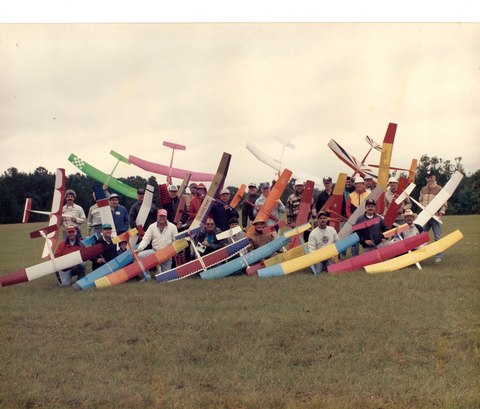 Much of the income generated by the club is the result of contests held. A major contest is held every year over Thanksgiving weekend called the Tangerine. This event brings contestants from interstate and sometimes abroad to fly at a time when many pilots are unable to fly because of winter setting in. The Tangerine is well known in soaring circles and adds much to the rich Buzzards history with many a story told of a particular win at the Tangerine. Other contests are held every year also including at least 2 AMA sanctioned FSS events and a Gentle lady Plus contest as well as more recently a hotly contested 4 contest series for a particular class of sailplane like RES. The continued success of the club hinges a lot on the attendance being maintained at these important contests.
Since the club also has many sport flyers events are also held which do not involve contests such as Fun Flys and Club Appreciation days. On these days club members can come out to socialize with their friends and fly whatever they like while they enjoy a burger or a hotdog.