Ed White flew his Fusion with precision - especially in the fly-off.

Sunday dawned with the same Cirrus cloud high overhead and a forecast that soaring pilots would die for. Temps to be 70 around lunchtime rising to 76 by 4:00pm with humidity negligible and a wind that was going to be very light but variable.

It was this variable wind that created the first problem for CD Rick Eckel. Should we change the winches to the opposite direction for the wind as forecast or should we leave it the same as yesterday? Change meant that our very large tents would need to be moved completely across the field. The decision was quickly made to set up in the opposite direction and many hands made light work. The Pilots meeting was underway almost on time and CD Rick once again reminded us to keep away from the neighboring horses and trees at the other side of the field. We would be shooting for 6 rounds of flying in UNL and RES classes. 31 pilots once again registered for Unlimited including a very welcome visitor from the Netherlands – Mr Tjakko Weber. Our good citrus farmer – the famous Ed White was also relieved of his duties at his Orange Empire to come fly with us.

We lost a few RES pilots overnight with Brian Smith and co returning home early to TN but 8 pilots registered to fly RES and we were underway to fly the first round shortly after 9:00am. 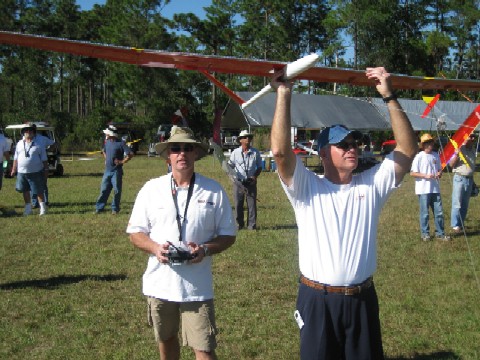 Jiakko Weber of the Netherlands gets ready to fly his Hera. Larry Pitts launches.

The sun had not broken through the high cloud yet and lift was marginal at best. Even some of the best sticks struggled to find enough up air to make their time during round 1. Though the task was still 8 minutes only 13 fliers made better than 7 minutes. Once again Nathan Miller showed us all what an excellent pilot he is with a perfect 8:00 and 100 landing. I followed him with a 7:54 and 100 and third for the honors call up for round 2 was Paul Perret with a 7:53 and 100 4th was Jody Miller with a 8:02 75 and 5th was Kris Van Nostran with a 7:58 75. These top five were all AvAs except for my lone Sharon Pro. Clearly the air favored floaters in that tough round 1.

With the sun breaking through intermittently by Round 2 we had many more pilots making their 8 minutes. Lift was steady and a number of flights were completed turning gently in very light air at only 100 to 200 feet for much of the time. Both Nathan Miller and I missed our landings in UNL round 2 so Round 3 was honored up with Jamie Mercado piloting his Explorer to a 7:58 100 pipping Rich Kiburis who once again showed his class with a great 8:03 100. Rick Eckel the CD followed closely with a 8:04 100 John Kennedy flew a great round with a 8:07 100 to be 4th to launch and last on the honors list was Nathan Miller who scored a 8:01 75 in the RES class.

Round 3 and Round 4 were both flown in some of the most perfect soaring weather I can remember. It seemed that almost everyone in the field was getting their time and it didn’t matter what the pilot flew or how well he flew it there was enough energy for everyone. The landings were a different matter.

The forecasters had predicted the wind would be variable and variable it was. By Round 4 most of us found ourselves landing downwind. It never is a lot of fun putting unlimited machines on a spot with a 10 mph tailwind and its hard on the airframes too. Clearly we could launch downwind but the landing Zone was a problem. In fact the downwind landings were so challenging that for the entire length of Rounds 3 and 4 (78 flights) just 5 pilots recorded 100 point landings while almost everyone got their times. I had my first mid air during Round 3 when my Sharon tangled briefly with Paul Perret’s AvA. I lost about 50 feet recovering and we both completed our flights without further incident. Pauls Ava did suffer a small amount of damage to the leading edge of the right wing. Paul subsequently tangled with a tree in Round 4 when apparently his Rx installation failed after our midair and the AvA was retired for the day with a few repairs required. 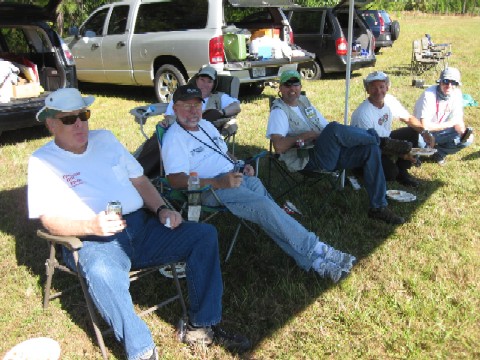 The Pompano flyers are a great group and always supportive of contests.

After a great BBQ lunch catered at the field Rick Eckel held a short Pilots meeting to announce the reversal of our landing approach which would have us approaching across the winch lines so care would need to be taken to ensure we didn’t have any launch/landing conflicts.
By the time lunch was over the conditions had become much stronger with great lift in patches and some very awful sink that would claim some victims once again. Round 5 saw Rustly Carver perch his gorgeous Onyx very high up in a pine tree after a sorty a little too far out for the sink on the way home.

Rusty was not the only pilot living dangerously with Ray Munro having an unfortunate early exit and Fred Cotton getting a bit close to the famous Buzzards trees also in Rd 5. I was timing for my son Jamie in this Rd also and we found horrible sink where we thought there should be lift but Jamie showed a lot of skill and courage to fly the tree line at under 100 feet to pick up an extra 1.5 minutes to soften the blow of a missed max.
By the completion of the penultimate round Nathan Miller was in the lead on 2695 points with myself in 2nd on 2632. Rick Eckel had recovered from a very ordinary first round to be holding down 3rd with 2557. Rich Kiburis was in 4th and Ed White made up the top 5. RES was also led by Nathan with his brother Jody coming 2nd. Kris Van Nostran was 3rd and Buddy Bradley 4th with Paul Perret in 5th.
The final Round 6 callup saw Nathan lead off with myself 2nd Rick Eckel 3rd, Jim mclean 4th and Ed White 5th. For me it was a humbling round as I flew in sink for 1.5 minutes going out and sink for 1.5 minutes coming back to just make it back to the LZ for 100 points and only a 3:00 min time. 3 of the others got away in great lift but any of us who made the wrong choice of direction to fly suffered the penalty of killer sink. Jim Maclean had a similar flight. As the round progressed lift cycled through and most pilots made their times to finish a great day of soaring competition in incredibly comfortable conditions.

The Tangerine format requires a sudden death fly-off for the Grand Champion to be decided. Rick our illustrious CD totalled the score sheets and announced the 5 fliers who were deemed to have flown best during the contest to duke it out for a 10 minute task and landing.
Launching order for the Grand Champion fly-off would be Nathan Miller, Jody Miller, Gordon Buckland (me), Rich Kiburis and Ed White. The rest of the contestants gathered around as we began our final flight for the beautiful Tangerine Champion trophy. As is often the case with Man on Man contests everybody covered each other and all five pilots were soon circling in strong lift in the same area of sky. Clearly the landings were going to be the deal breaker or champion maker (depending on how you looked at it.) Nathan got his AvA in with a few seconds off the time and about 12″ off the line. Jody was flying the Whale-aire and as she often does the whale slid on though the LZ. I was third to land and missed the time by 3 secs and landed about 19 inches off. Rich made his time spot on and landed a similar distance from the line to me. Everyone held their breath as Ed completed his flight and and as Ed often does, he hit the line exactly on time and finished just a couple of inches off center to claim the Champions trophy.
Rick then made the final presentations for the day including the top 3 in each class and category. The final awards were as follows. 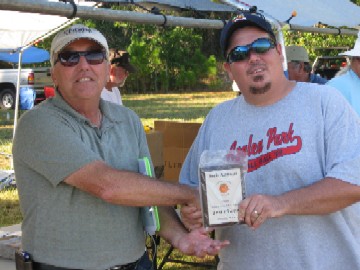 Chris Manley takes home some wood in the Sportsman Category 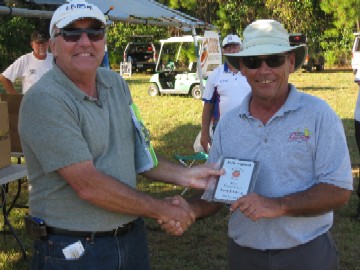 Personally I have never enjoyed a contest more than this – my first Tangerine. It was made to be a great contest because of many people behind the scenes. Particularly Rick Eckel, Raed Elazzawi, Al Parsons, Costa Francisco, Lewis Gray, Jerry O’Keefe and my darling wife Sheralyn for scoring with the expert assistance of Tiffany Manley. Thank you all for making this Tangerine a memorable one.

The weather was awesome, the comraderie was more awesome and the soaring was simply exhilorating.

I can’t wait till next year.

I hope all who read this report are encouraged to make the journey to visit us next year in sunny Orlando for our Tangerine on the Thanksgiving weekend. You won’t regret it. We’ll give you a great soaring time too.

Gordon is off to bed.