The flyers gather for a group shot Saturday morning

What a gorgeous soaring day we turned on in Florida for all our guests. You should have been there.!!!

The weather had been forcast for mid 60’s zero humidity and a NNW wind at about 6 mph. The high pressure system over central florida made for fantastic conditions for RC soaring with abundant weak lift and equally weak sink. The great thing was we could fly pretty good distances searching without losing and there was lift found in most parts of the Buzzards surrounds by each flight group.
31 flyers registered for the Unlimited contest including visitors from TN (Brian Smith and Co) and many from all over FL and even GA. The RES contest was entered by a smaller group of 15 fliers. Our CD Rick Eckel called the pilots meeting about 9:45 as scheduled and he provided us with the rules for the day. A NNW wind at the Buzzards field means we are launching from a corner with a fairly narrow corridor to manouver in for landing approaches. With the adjacent trees on each side it was clear that the trees would play a part in the fun at some point. CD Rick gave the Sportsman unlimited pop-offs and one pop-off for the day allowed for the Experts. We were going to try to fly 8 rounds so after a quick group photo flying was under way shortly after 10:00am. With open winch honors call-up in place once the 1st round was flown the 2nd round would start with the top 5 from the previous round leading off. It’s not a bad format as it makes the better fliers get up at the beginning of each round and show the less proficient where the lift is. 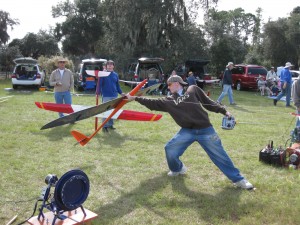 Round one saw many pilots find just enough weak lift to maintain their height for the 8 minute max. Others weren’t quite as lucky as they flew in the wrong patch and found themselves short on the clock so the air wasn’t all up. The landing zone was set up as a runway style landing with graduations of 25 up to 4 feet and 50, 75 and 100 for the nose within 6 inches of the line. The landing points are measured with a stick.

Early on it was clear that with so many pilots making time fairly easily it was going to become a landing contest. For the only time today I managed to get it almost perfect on the first round with a 7:59 and a 100 point landing. That meant I would lead off the 2nd round with my Sharon as first flyer in the honors callup. It would also be my last callup for the day as my landing thumbs basically deserted me. Not so for Rich Kiburis and also Nathan Miller flying an Ava in Unlimited. These two were like landing machines all day pumping out 100 pointers nearly every time at the line! In fact in the 6 rounds flown Rich Kiburis flew 5 100 pointers and a zero 6 for the day. Nathan flew 2 100’s, 3 75’s and a 25. Great landings guys. Jim Mclean flew his Perfect with precision and was in the top 3 all day but somehow missed his time in the last round. As the day cooled off many fliers who had been right up there leading early on, fell away with less than the required 8 minutes in the final rounds. CD Rick Eckel flew consistently for the first 4 rounds and then along with Rich Kiburis and Gerald Baxter failed to get their full quota of flight time in the last couple of rounds. There was marginal lift available but ranging further out was required sometimes to find it as the day cooled off. The ground had been shielded from the sun pretty much all day with very high Cirrus cloud drifting across. This damped the enthusiasm of the thermals somewhat by 3:00pm and the last round saw just 6 of the Unl fliers get our max in the last round flown. Only 5 of the 15 RES fliers got their 8 minutes in Round 6 also. 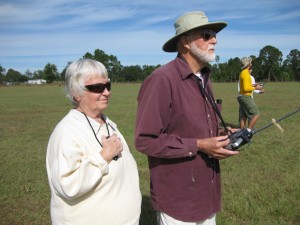 Art Scheurer flys while his wife times for him.

RES was dominated from the start by Brian Smith from TN and the two Miller brothers. Nathan was a machine as he guided his AvA to the line every flight and Brian Smith was also unstoppable with great landings all day. Jody Miller would have done much better if he had a better set of anchors on the AvA in Round one as he found himself in the way of his own ship and overshot the line. He quickly adjusted though and scored some great 100 pointers in the following rounds. Paul Perret also did really well and stayed near the top of the leader board all day.

A special mention to one of the Sportsman who flew today. I had the pleasure of watching young Leif Francisco get a great 8:00 max flying a little Spirit in RES. Well done Leif.
Also my son Jamie who hasn’t flown an UNL ship in a contest in many months. He flew great all day and did some amazing things with a very old ICON.

It was in the 5th round that one of our famous Buzzards trees claimed a Shadow flown by Lance Ropke from NW Florida. Perched high in an Oak tree on the adjacent land that was were she stayed until Lance highed a Pro to come and climb the tree. Some adventurous manouvers were also conducted by some of the fliers with tight circles being flown at fairly high speed in the landing corridor. It looked pretty hair-raising and potentially could become an issue so CD Rick called a brief pilots meeting after the 6th round was complete to remind us of the need to stay away from the neighboring horses and keep clear of the trees. With lift fading for the day a vote was held whether we would fly a 7th round and the decision was made to call it a day. 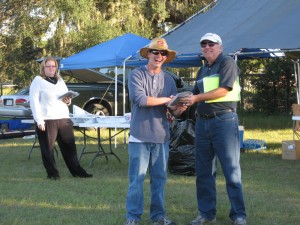 Presentations were made by CD and the results were as follows: 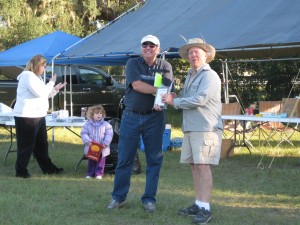 A special thanks needs to be made for those working behind the scenes. Particularly Lewis Gray on registration, Sheralyn Buckland and Tiffany Manley on scoring, Raed Elazzawi on setup and winch repairs, Al Parsons for organizing lunch and general line break fixer upper. I am sure there waere also others I have missed but a big thankyou for all the Buzzards who worked to make the Tangerine Saturday such a great success.
A fantastic day was had by everybody and better weather yet is planned for tomorrow.

See you all there.

I feel sorry for those that can’t be with us.