Another seriously belated Gordon report.
Sunday promised to be another fairly breezy day with the sea breeze working early and an 80% light cloud cover disrupting the suns work. We were underway a little earlier than Saturday and Jody Miller began exactly where he left off on Sunday with precision maxes coupled with precieion landings. He was going to be very hard to beat today. I had flown two flights with my Icon 2 and really had no great expectation of success as I was still making adjustments to mixes etc to get it landing reasonably well. In spite of that and a minute lost in round 1 – I did manage to post 40 pointers all day and din’t miss another time. So after 7 rounds I had given up only the 54 seconds from Rd 1 and a further 2 seconds off for the other 6 rounds. Jody on the other hand was nearly perfect all day with just a few seconds of lost time along with mostly 50 pointers in the LZ. The remainder of the field was led by Mike Popescu, Mike Williams and Raed Elazzawi who were trying hard to stay in front of each other. By Round 6 the lead was Jody’s by 92 points over Mike Popescu and I was a further 12 points behind Mike. It was all but over and all that Jody required was another 7 minutes of reasonable air to rcord a perfect weekend of maxes. As can happen in soaring I think Jody became a little complacent and though we made a good read and got the X into lift on the upwind side of the field Jody didn’t manage to work it well enough and fell out the bottom. Unable to find air for a save he was forced to land early to leave the door open for Mike or I to win the contest. I managed an uneventful 7:00 – 40 points and it was down to Mikes flight. He had it won with 6:58 on the clock but for some reason came up so short in the LZ that he scored a zero landing leaving me with an improbable win and Jody in 3rd place. This was clearly the one that got away but it is this sort of mishap that make great pilots like Jody even bettr and I am sure he will learn a lot from that experience. Sportsman 3rd place was taken by Dave Shaw and his 2M with Larry Squire in 2nd and Don Grisham our top Sportsman on the day. As can often happen at any contest there are moments that we can always remember. Larry Squire provided one of those in Round 6 when he flew a landing pattern out so wide that like a bullet he pushed his Shadow through the nbackyard of the adjacent house at less than 6 feet altitude to go behind the trees on the fenceline and re-emerge on the other side. I could not believe he had flown so low, so far away, and so quickly but not hit anything solid. Great stuff Larry. As always the Punta Gorda guys with Bill Grier and John Agnew at the helm put on a great contest and we really enjoyed a special event. Thanks fellas. Lets see you all again down there next year.
Gordon 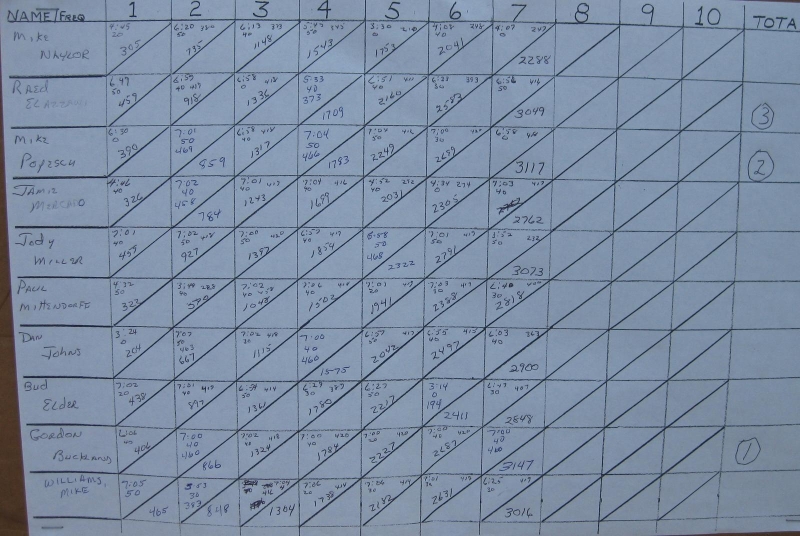