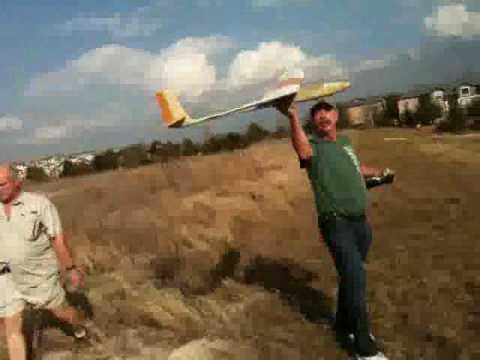 On a recent Sunday that was forecast to be very windy my thoughts turned to slope soaring and the potential of doing so in Florida – as the Buzzards field was not going to be a pleasant place to fly with 20mph winds and an overcast sky. I had seen some mention of potential slope soaring sites on a website a few months previously, so Google was put to work and www.slopeflyer.com was re-discovered. The dunes on the east coast from Daytona Beach down to Cocoa were mentioned as were some promising locations in the Clermont area. I had spent a fair amount of time in Clermont over the last few years and based on this report and the Southerlys blowing, this day would best be flown on the Clermont hills if anywhere. It so happened that Gordy Stahl was in town so I hooked up with him and also Bob Pedersen from Colorado was looking for some flying buddies. Bob is in town doing a Nasa project for 5 months so I know we will be seeing more of him again. He has his DLG’s with him but will also retrieve his big ships later next month to come fly with us. We met at a nearby Panera Bread for a snack and the slope hunt began.

First stop in Clermont was a promising ridge facing southeast directly behind the target on the North side of Highway 50. A suitable road on the west side of the Target provided access to a ridge overlooking the shopping center roof and a small valley behind the building which funneled air up a fairly long slope to the top of this ridge beside the golf course. A couple of hawks were flying in the area and exploiting the lift, so we got the trusty “wood” Duck out and threw her off. In actual fact though the slope was not large the southeasterly that was blowing was about 10 to 15 mph and provided ample lift for the Duck. This is only a small ridge but does have a good parking area, as well as a reasonable landing area at the top. The down side is the proximity to the roof of the Target and the adjacent trees to the right. I launched three times and tested the lift on each side. About 100 feet to the right was good and over 200 feet to the left was working OK also. (Flyable but not the ideal location.)

Next stop was a spot identified on slopeflyer.com behind the Bob Evans on 27. This is about 1 mile south of 50 on 27 on the left side. If you park at the back of the Bob Evans parking lot, the field on the south side is available to walking access and a beautiful slope is revealed once you walk about 50 yards from the parking lot. A small lake is guarded by highway 27 on the right side, while an apartment complex and some smallish trees guard the left side. Approx 60 yards of perfect RC soaring  slope awaits with a steady south wind bearing almost straight against the face.. The Duck just loved this site. Whether upright or inverted, she was a joy to fly and the lift extended well forward to approx ½ way up the lake before it petered out. Lift was smooth and clean and the landing area on the top was just perfect with 2 foot high grass greeting the wings of the Duck when I flew too far behind the crest and didn’t make it back to the edge.

Bob Pedersen had brought his XP5 along and Gordy convinced us that even though the wind felt strong it would be pretty smooth out front and a DLG would fly great. So Bob fetched his XP5 and I grabbed my trusty old Vixen from the truck and fly they did. Just as Gordy said the lift was smooth and the wind not too strong for our un ballasted DLG’s. It was a lot of fun chasing Bob back and forth on the slope and practicing touch and go’s off the long grass on the lip of the bank. The wind was just about right to hover the DLG’s on the crest with a little camber. This would be a great site for flying any sort of slope combat or just for fun. The lift went up about 125 feet and out a good 200+ feet in front of the slope. The flying area was a good 150 to 200 feet wide and not an obstacle to worry about. The landing area on top is absolutely divine with nice grass and a 50 yard wide paddock back to th parking lot. In fact you could easily catch thermals downwind of the slope and back over the roof of the Bob Evans restaurant. We felt a few come through as we busted back and forth on this great site.

We spent nearly 2 hours at the Bob Evans slope and really enjoyed the favorable wind. Any south wind from ESE to WSW will work here. With the afternoon wearing on we decided to see what else was about. Across the 27 and back toward 50 about 100 yards from the Bob Evans there is another street leading up to a housing estate behind a strip mall. We ventured up there and sure enough a southeast facing slope opened up back over the top of the access road we had just come up. I flew the Vixen here and though the lift was OK, clearly it was not the same strength as the lake front slope we just left. The buildings below broke up the air at this site. Even so with a southeasterly blowing it does work and you can fly it. A red tail hawk was also enjoying the free ride. The vacant lot owner arrived while we were there and wanted to know what we were doing. Gordy explained the virtues of RC Soaring and before long he was wanting to know more about flying and could care less about us flying on his block.

We wanted to check out a site back on top of the hill on 50 behind the hotel. We had seen it earlier and it looked promising for a northeasterly wind. Sure enough – once we got on top of this beauty, we discovered it over-looks a soccer field and has great access with plenty of parking and landing area on top with a great slope at least 75 feet to 100 feet up and facing almost due north but also curving around to the west side so it opens up to an easterly as well. We could not fly this location with the wind from the south but it will be a sure thing with the right northerly or easterly wind.

Last stop was an area we could see from the Bob Evans earlier. This was an area of earthworks and broken ground on the south side of highway 50 on top of the hill. We couldn’t find any easy parking here and had to actually jump the gutter and park over the sidewalk where the fence was down. After walking about 180 feet south around some large piles of sand the vista opened up to the best slope of the day with a 300 foot long escarpment facing due South overlooking brush and a small lake. The south wind was busting up this slope so off the Vixen went and what a great flying site it was. With constant lift the entire length of the ridge I could fly the Vixen to the limit of my vision in both directions in the gloomy light. A hawk flew with me for a while and Gordy video taped me doing a few low sorties along the slope front. This site is secluded and perfect for soaring but seems to have the limiting factor of no parking nearby. It is not posted but does have a barb wire fence which was down where we entered. In all the day was extremely successful with plenty of soaring accomplished and some great locations discovered which can be soared again in the future. We actually soared 4 different sites and discovered one other. Next job is to organize a slope day so more of the Buzzards can come out and enjoy the fun. Who’s up for some sloping next time it blows? Who needs LSF slope flights?  For my Level 5 task I need 8 hours of wind and 2 Level 2 LSF witnesses. (Now you see why I was looking at slopes in Florida.)

The day started with DP saying “good luck finding a slope soaring site in Florida!” Thanks for the good luck wishes DP. We found some real beauties. 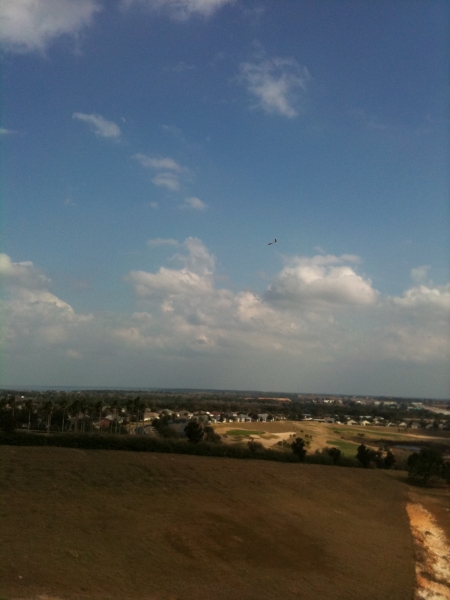 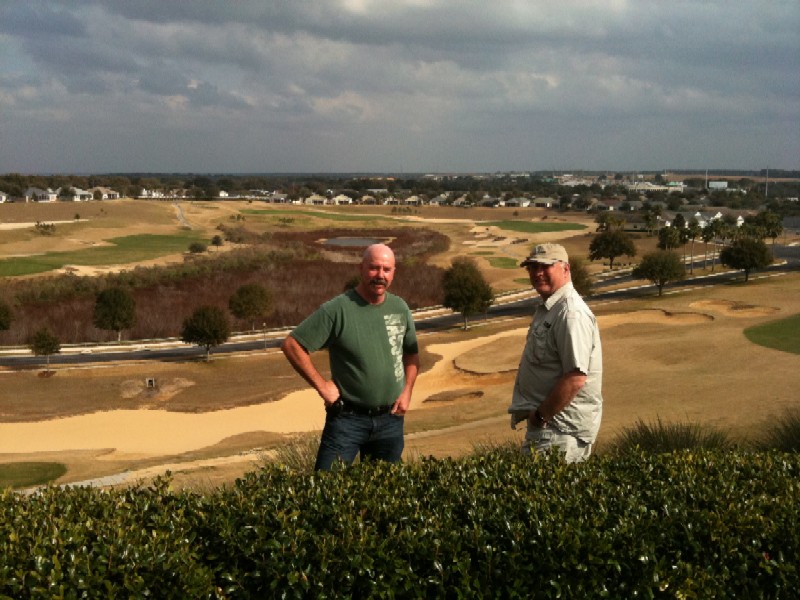 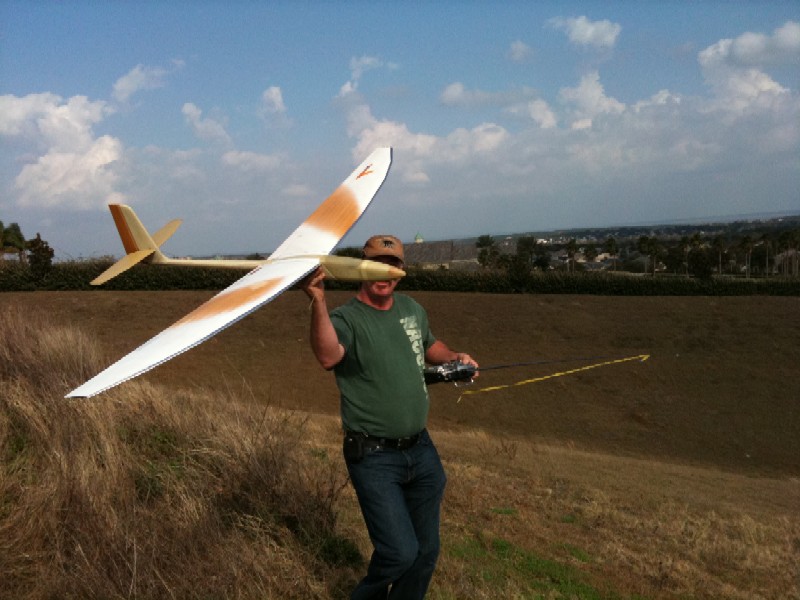 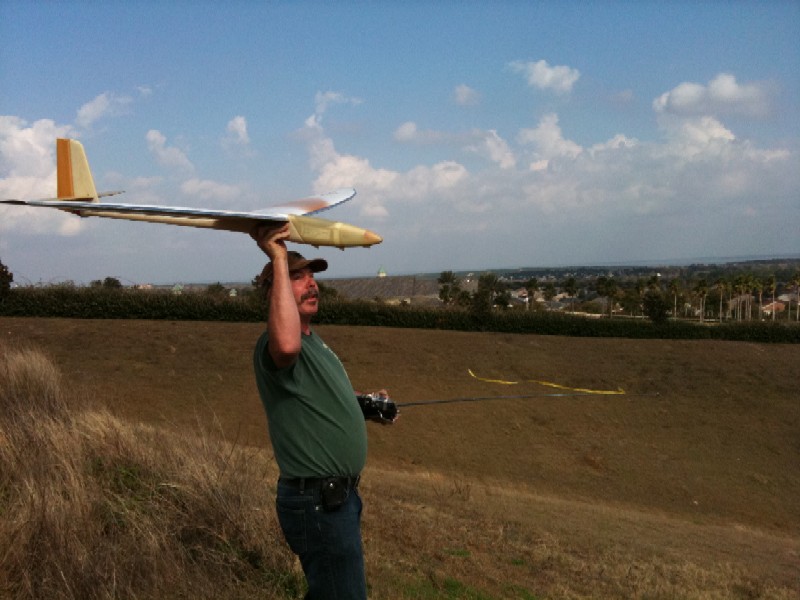 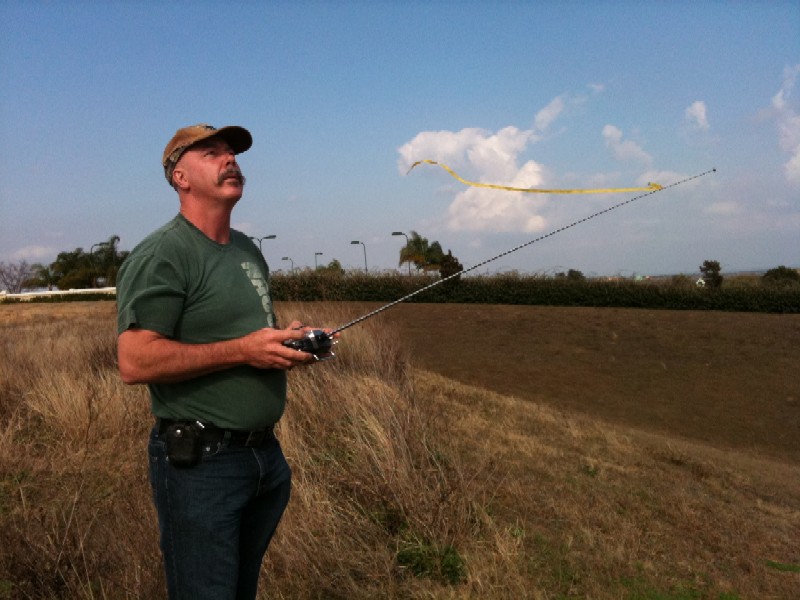 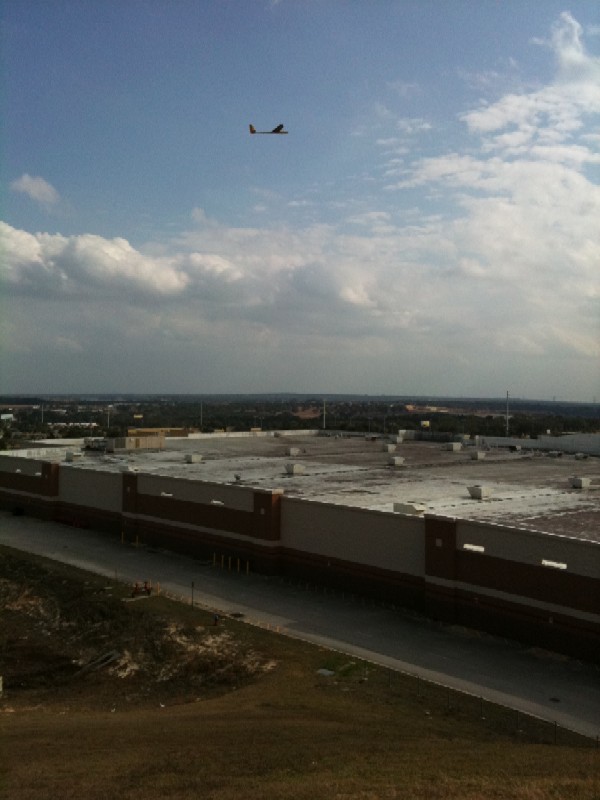 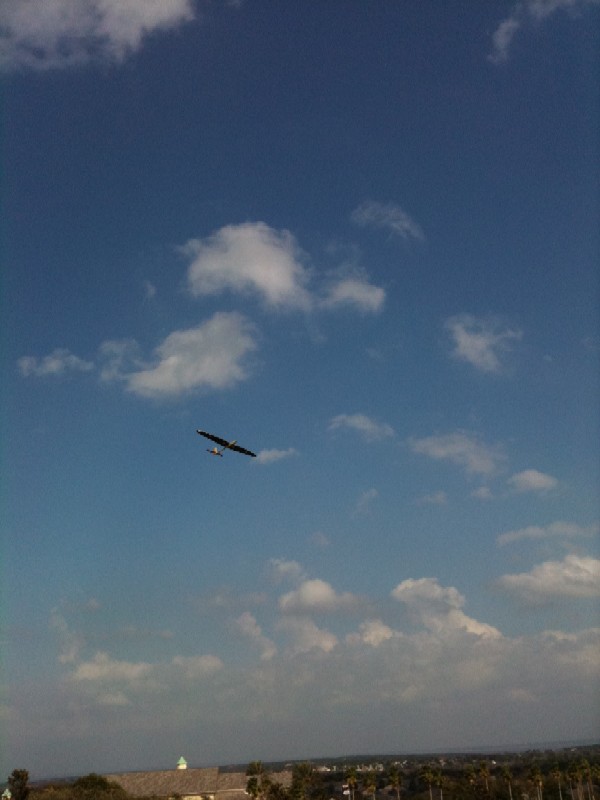 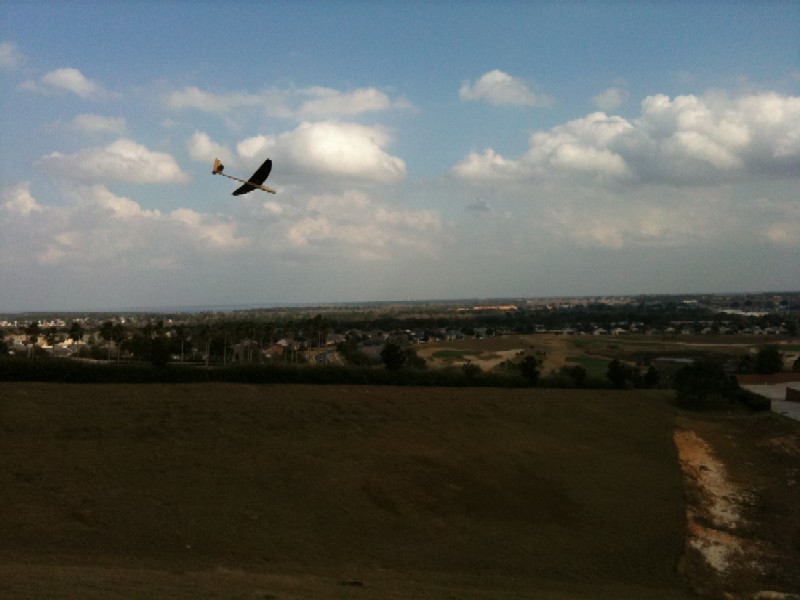 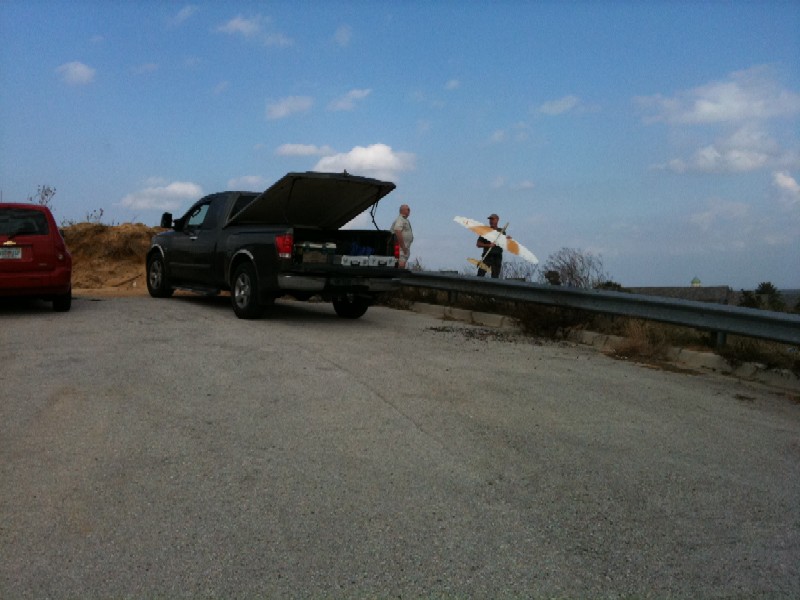 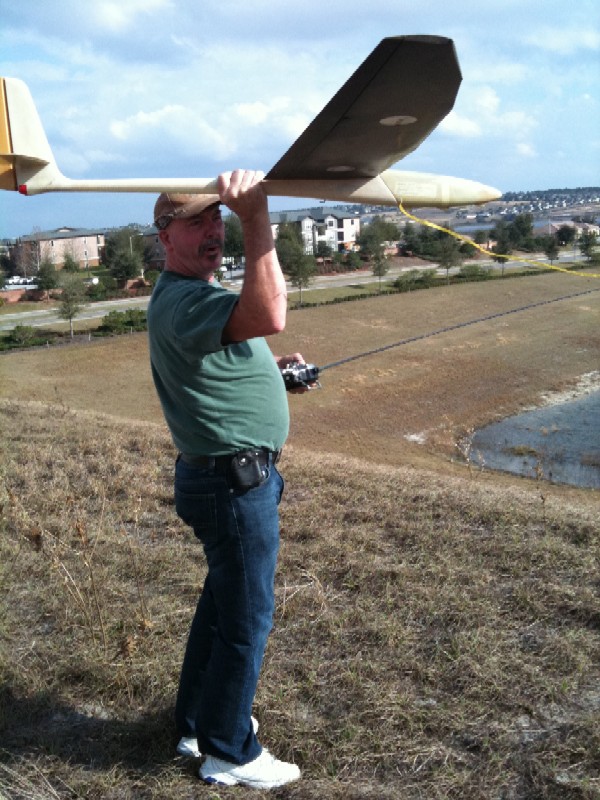 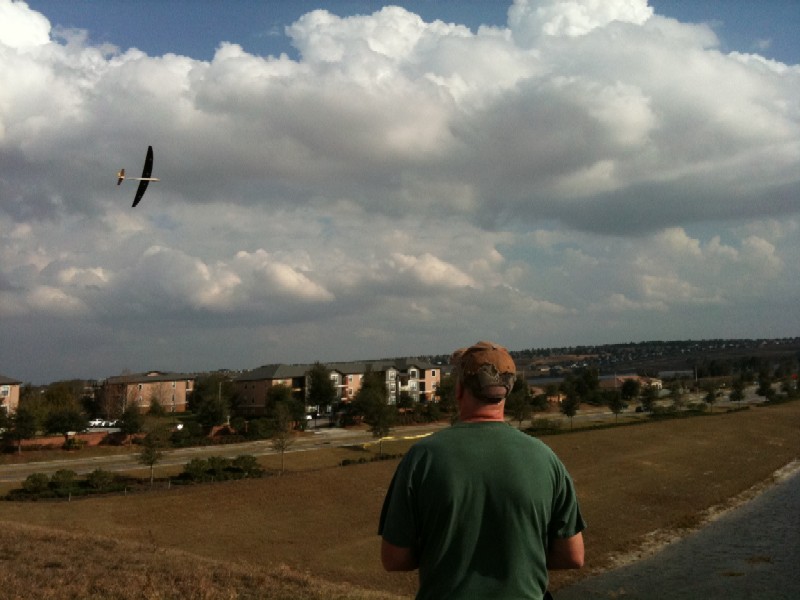 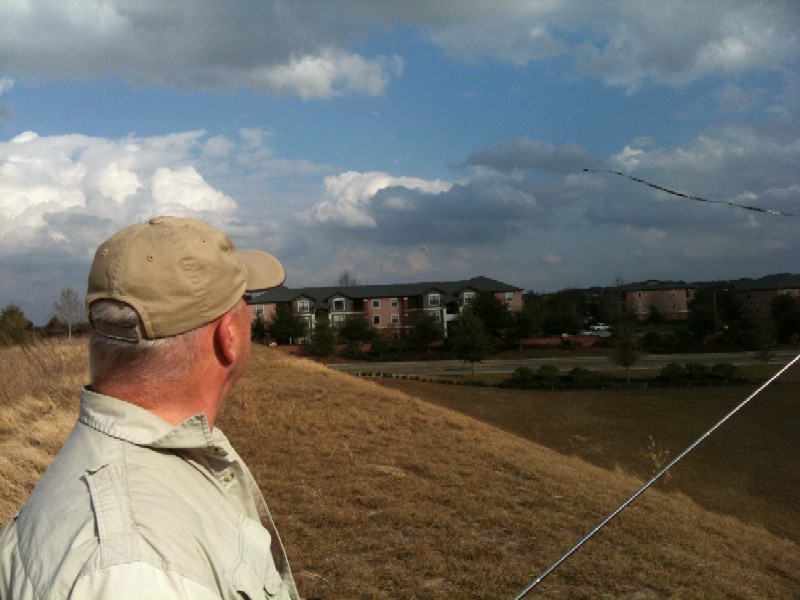 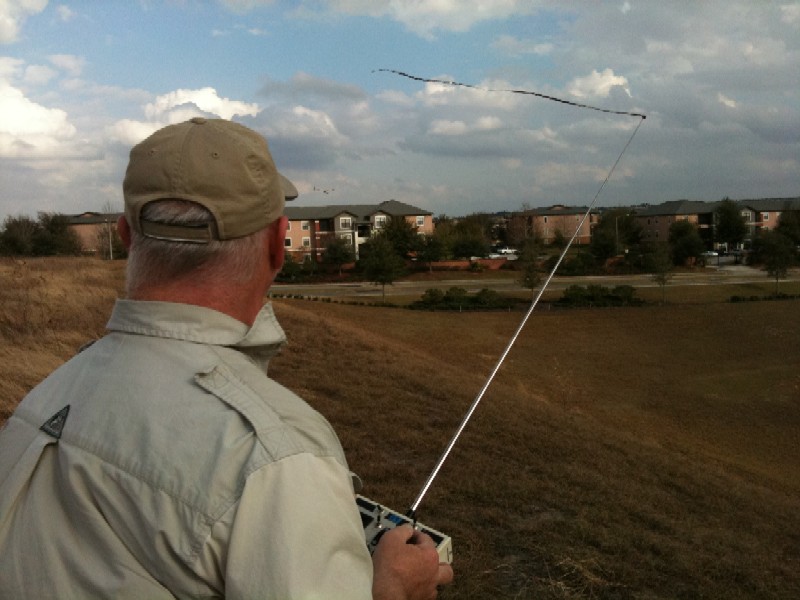 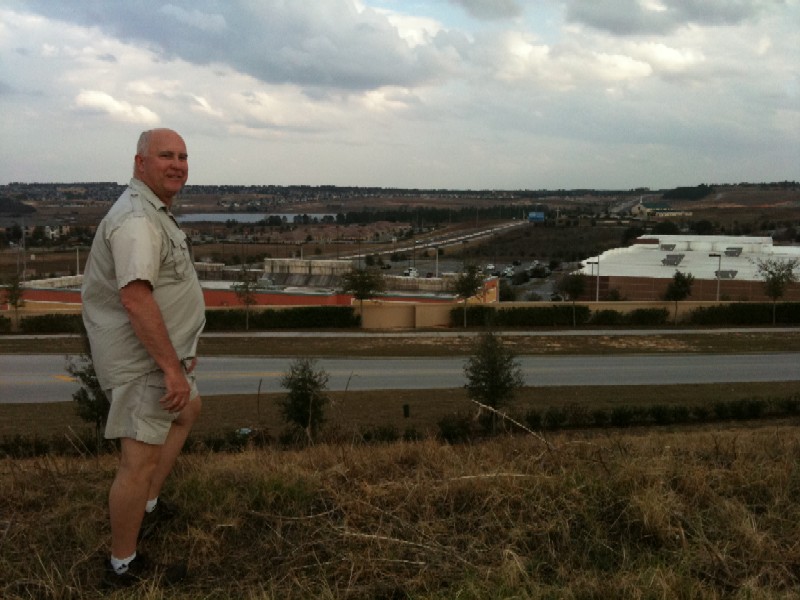 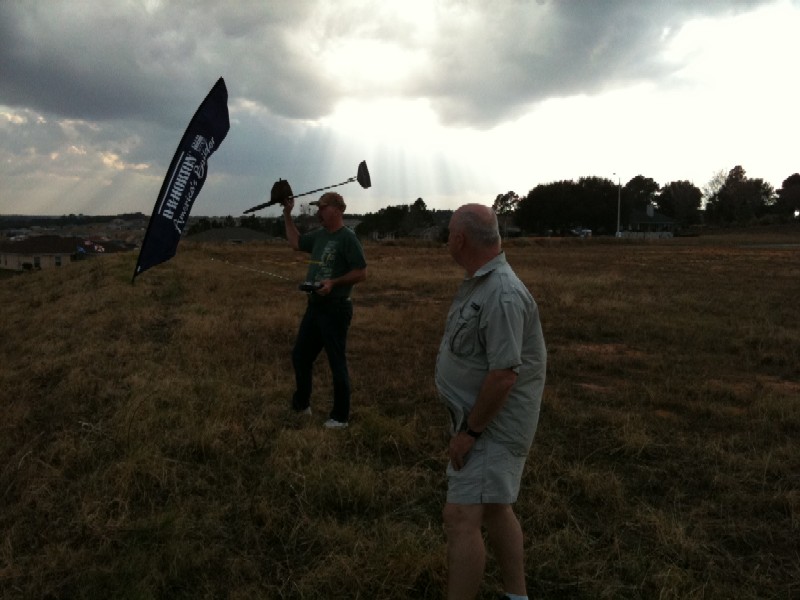 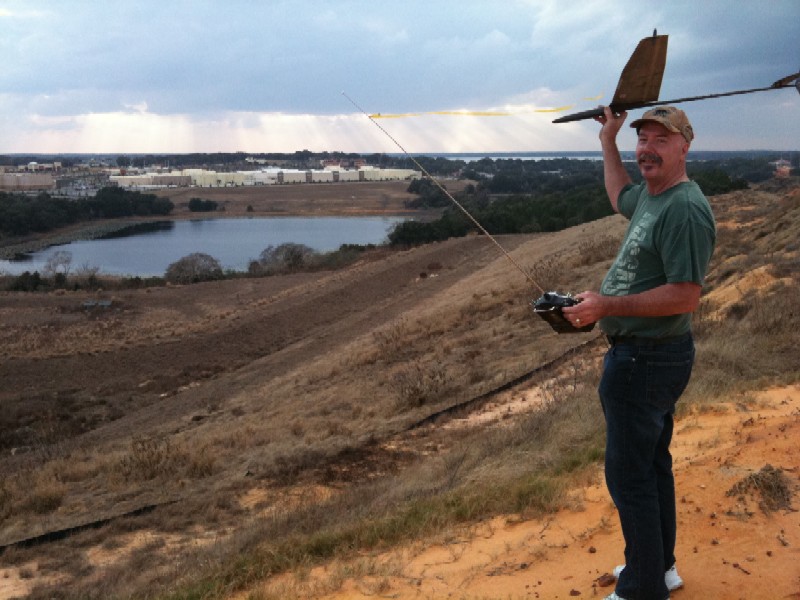 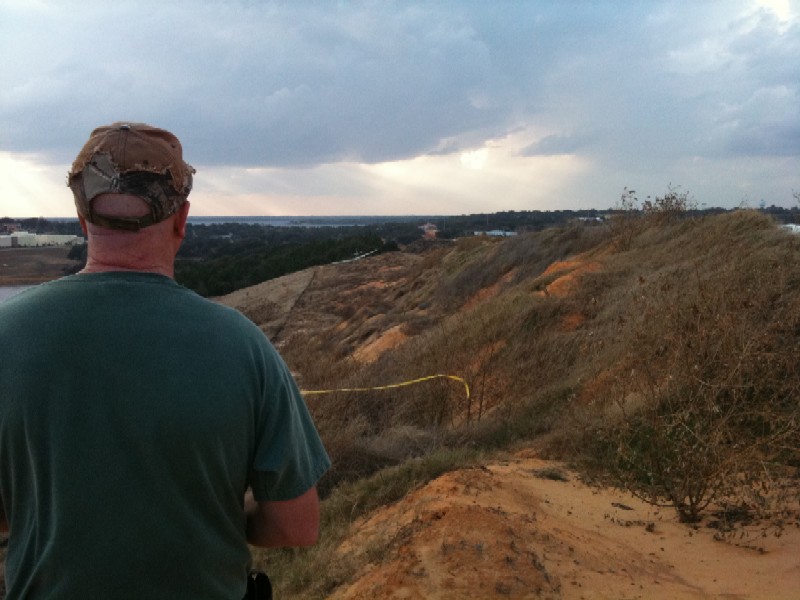 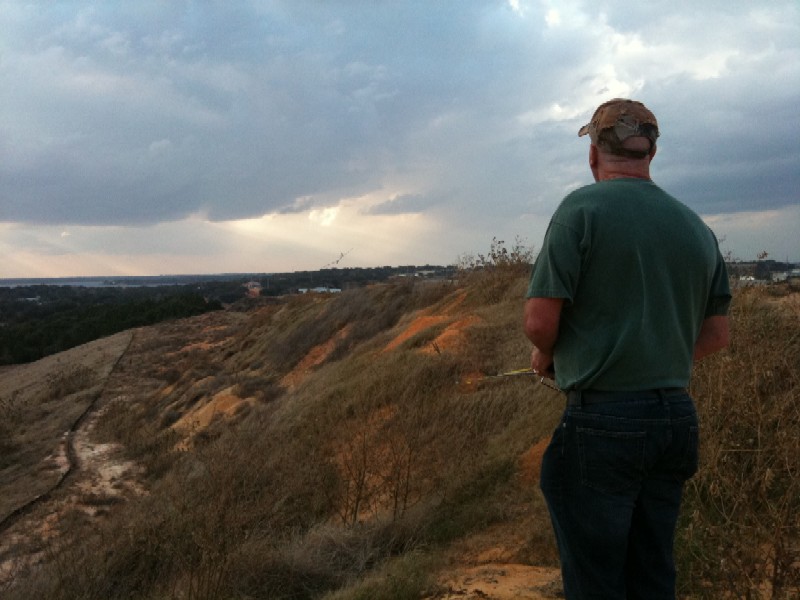 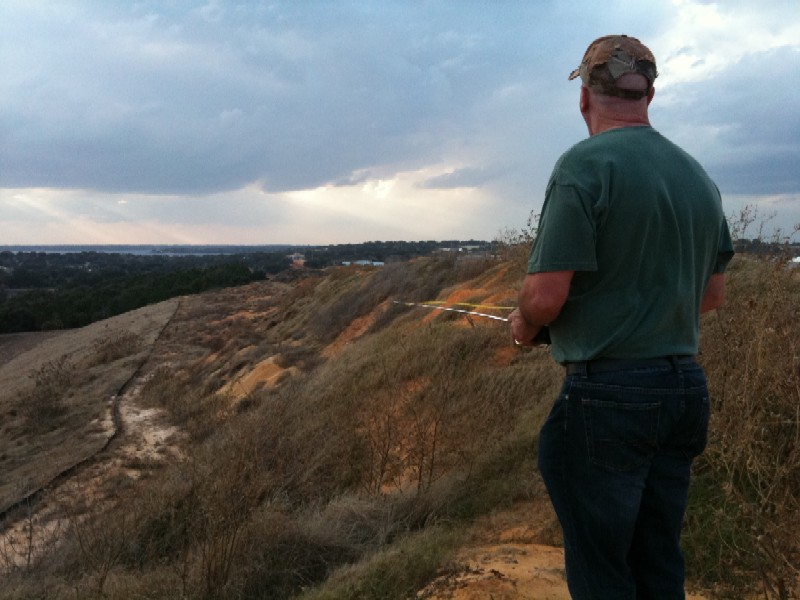 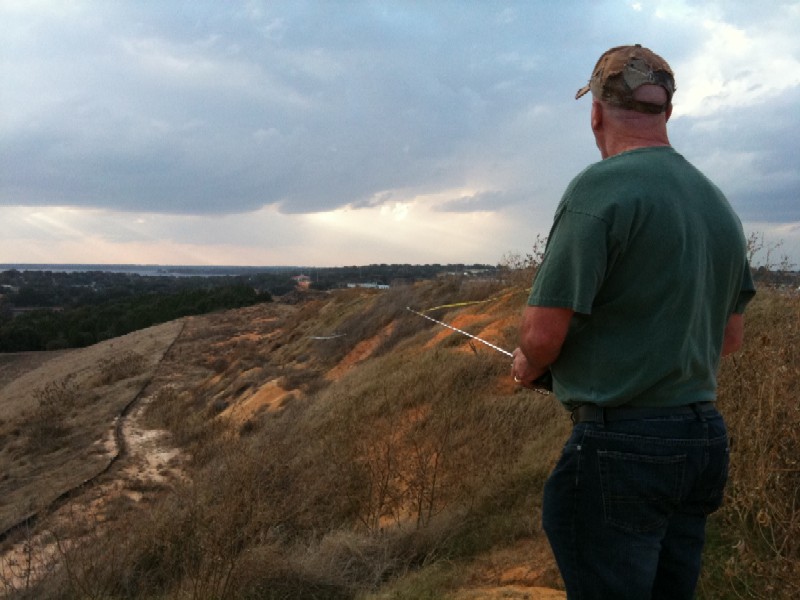 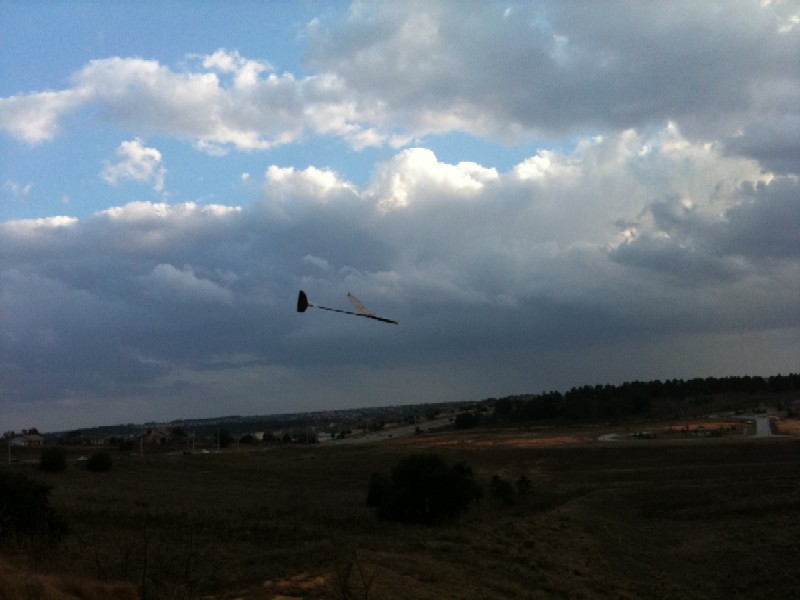 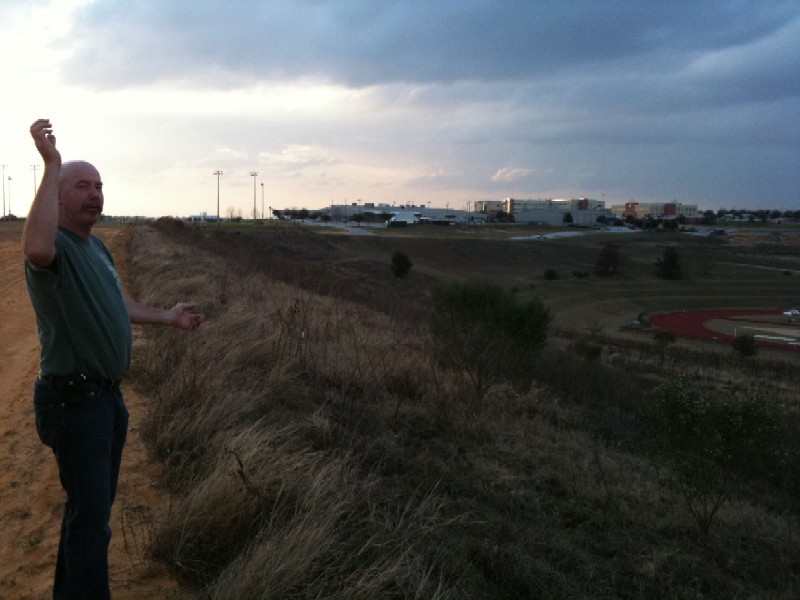 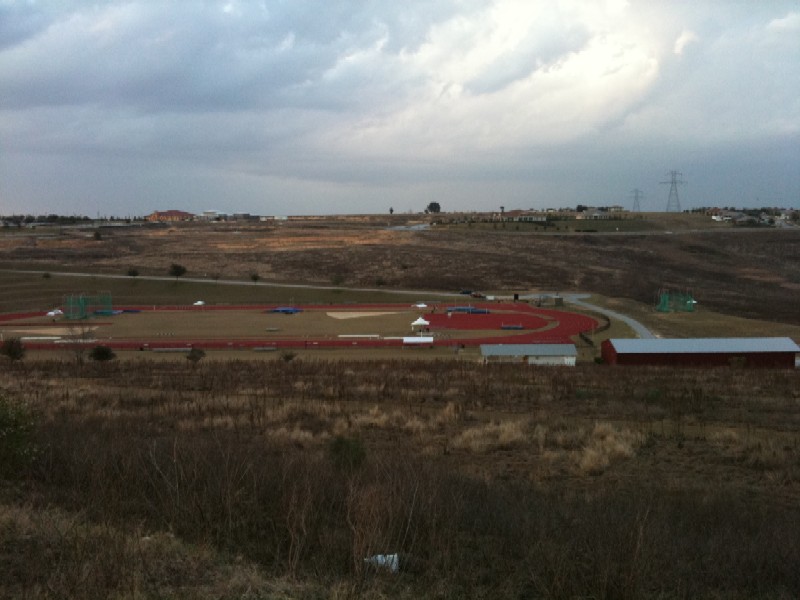 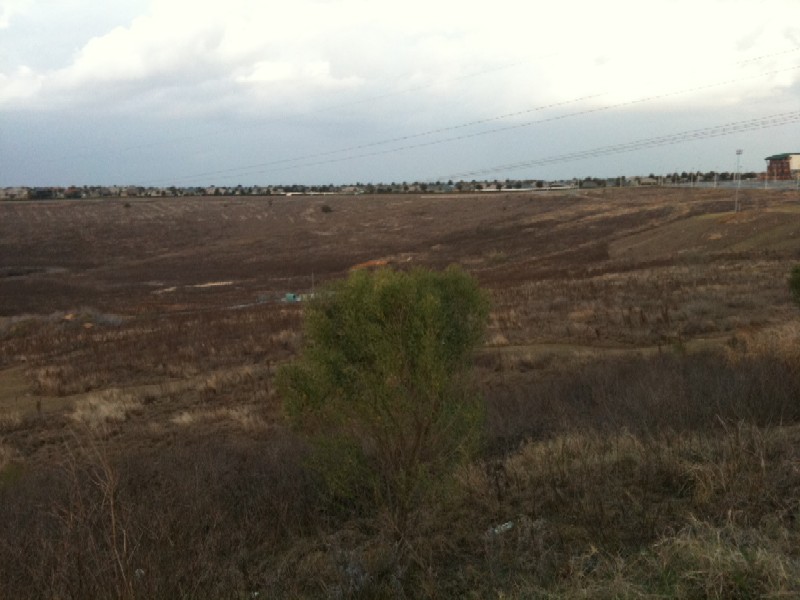